The spring was full: dynamic and energized students in both of my classes; senior theses to advise, some of them extraordinary; a trip to SUNY Oneonta to give a talk on liberal education; a trip to Las Vegas for the Western Political Science Association annual conference and a roundtable on What Would Socrates Do?; workshopping my latest paper on Herodotus with the terrific graduate students at Penn; serving as an external examiner for the Political Science Department at Swarthmore College; and meeting the outstanding students for the “360” I’ll teach in the fall entitled “Arts of Resistance,” with my course as one in a cluster of three courses organized around questions of silence, voice, and participation in institutions, with a special focus on schools and prisons. I’m out of breath!

Among the many good events, a few successes stand out: the acceptance of my essay on Don DeLillo’s Cosmopolis and the politics of literature by Theory & Event; the “official” launching of the Tri-Co Political Theory Workshop, which Paulina Ochoa-Espejo and I did by winning a $3000 Mellon Seed Grant to fund guest speaker visits and dinners; the publication of book reviews of Adam Sandel's The Place of Prejudice (in Contemporary Political Theory), of Matt Brim's James Baldwin and the Queer Imagination (in Theory & Event), and of David Branscome's Textual Rivals (in Polis); and, perhaps most importantly, the tangible sign of my students’ appreciation in our Hannah Arendt cake at the end of last semester. (Notice that it reads: “Happy Political Thinking Arendtians”!) 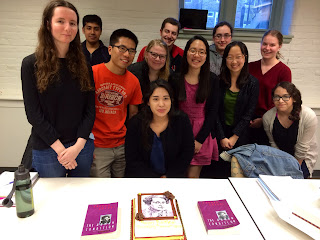 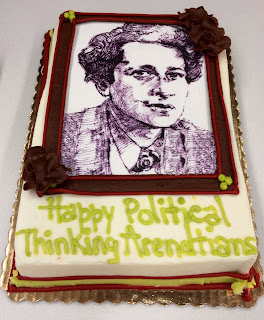 Now that the summer has begun, I’m concentrating on two facets of what I think will be a single project continuing where my DeLillo essay ends. I received a grant from the Center for Social Sciences at Bryn Mawr to read much more deeply into what I call “the politics of language,” studying some of the philosophies of language in modern political thought (e.g. Hobbes, Locke, and Rousseau) but then devoting a good deal of time to Wittgenstein, Austin, and Cavell as well as their epigone and critics such as Bourdieu, Derrida, and Butler. (My syllabus was inspired by Jason Frank's "Politics and Language" course taught at Cornell in 2010.) I’m writing a contribution to a roundtable on “American Literature and Political Theory” for this fall’s APSA meeting that makes an argument for American poetry as oriented by what Adrienne Rich calls “the dream of a common language”; the politics of language allows me to elaborate what I mean by “a common language” and how it names a literary yet also political project that has received little attention (as far as I know) in political theory circles. At the APSA, I will elaborate this broader argument through a reading of Claudia Rankine’s brilliant book-length poem Citizen.

Alongside this reading and writing, I’ve devoted an enormous slice of my time to rereading all of Joan Didion’s books – five novels, seven works of non-fiction, and two memoirs in all – as I prepare an essay provisionally titled “Joan Didion and the Dream of a Common Language.” As I’m still finishing a complete draft of the essay, I’ll say only that I’ve learned an immense amount from Didion’s writing but I also think she comes up short, in a way, on the broader project of “the dream of a common language” that I’m trying to develop. How and why she does so is what makes reading her work so worthwhile.

As these two projects have progressed, I’ve filled the gaps with ongoing concerns as well as anticipatory excitements: writing on Herodotus as I craft fellowship proposals for the fall (since I still do intend to write this book on Herodotus next – and have a very good idea of what it will look like!); reading about prisons as well as a series of prison narratives and studies in preparation for my 360 cluster; and perusing literature that Didion names as formative for her own work as I try to learn how to read her more intelligently. This last project led me to the most sublime experience of the summer: reading Conrad’s Victory while gazing eastward across the Indian Ocean, supine on a lounge chair overlooking Diani Beach, Kenya.
Labels: Teaching